Psalm 72:18-19  Blessed be the LORD, the God of Israel, who alone does wondrous things. Blessed be his glorious name forever; may the whole earth be filled with his glory! Amen and Amen!

As King David neared the end of his life he decided to write a prayer for his son Solomon who would succeed him on the throne of Israel. We have that prayer recorded in the Seventy-Second Psalm. As he prays for his son to be a man of justice and righteousness, he recognizes that the distinguishing characteristic of a great leader is compassion. Three separate times in this prayer David refers to the recognition of the needy, the defense of the poor, and the deliverance of the oppressed.

Then something happens. King David is transported in his spirit from his prayer for his son to a recognition of God’s son as the true King. Suddenly, in words that cannot apply to the historical reign of Solomon, David speaks prophetically about the coming King of Kings. It is at the conclusion of those prophetic words that David writes – Blessed be the LORD, the God of Israel, who alone does wondrous things. Blessed be his glorious name forever; may the whole earth be filled with his glory! Amen and Amen!

Recently I had an experience that was similar, although not nearly at the same level of Divine revelation. Last Tuesday my wife and I stood in the midst of the ancient Mayan city of Tulum on the shores of the Caribbean Sea. I was thrilled. I love places like this and could spend hours exploring them.

As we listened to our tour guide, and expert in Mayan history, he began to inform us about the various gods of the Mayans that were depicted in the carvings on their temples. He talked about only a few of the 136 gods that they worshipped, like the rain god and the sun god and the bee god. Then he pointed to a carving on the corner of one of the temples. It was carved in such a way that when seen from the side it formed a profile of the god, and when seen from the front it formed a full face. Hopefully you can see that in the images below. 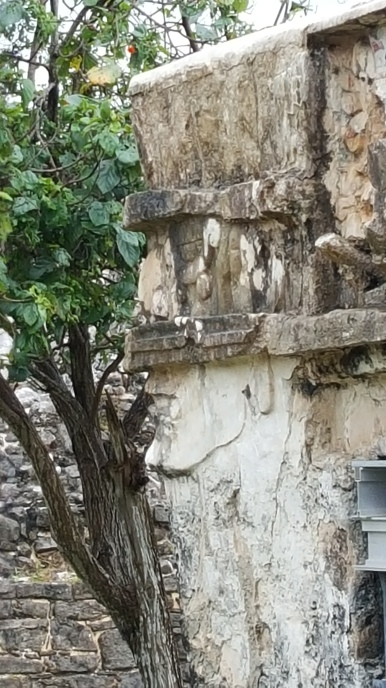 As the guide explained to us that this god was carved into all four corners of this temple, he stated that this was the creator god, the supreme god over all the other gods.

Up to this point my mind was totally concentrating only on the earthly historical aspects of the Mayan people.

But then the guide pointed to another carving of a god. He is called the descending god, and is carved with his head downward and his legs upward. In the first picture you can see the head and a leg, and in the second you can see the legs more clearly. He is seated upside down on a throne, and is always at the top of the temple. 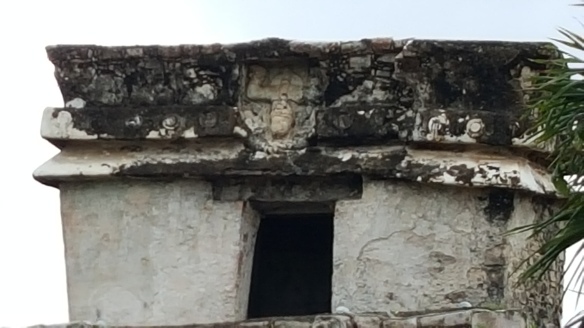 Immediately my mind was transported from the historical civilization to the historical Christ.  Did this ancient civilization have an understanding of God that included God himself coming to earth? I began to study the gods of the Mayan culture, and there is, according to one source, no evidence that the descending god represents Christ. And yet, even in all the false religions of the world, there is an understanding that God is somehow involved personally in the affairs of man.

What started out as simply an historical adventure turned into a deeply significant spiritual moment for me.

Blessed be the Lord!

1 thought on “The Historical Christ”